This program is for advanced users! Always make a backup / restore point and read carefully what you are doing before applying the tweaks. The program can also have adverse consequences with some already damaged Windows installations or improper use. There are also users who report serious problems after tweaking.At your own risk!

Tweaking.com Simple System Tweaker is a handy tool to experience your Windows PC faster. By means of various small tweaks or adjustments to the standard settings of Windows, your PC is optimized and made a little smoother and faster.

Simple System Tweaker is from the same maker (Tweaking.com) as Windows Repair - another extremely useful tool for repairing Windows problems. Simple System Tweaker is a tool to make your PC a little faster and run smoother. With older PCs, this can save some time on start-up and shutdown, network tasks and opening programs. PCs should also become more stable.

Tweaking.com Simple System Tweaker proposes various tweaks (adjustments) to the Windows default settings. According to the maker, these are only safe tweaks that cause no further side effects or other problems. The tweaks are arranged in four categories: general tweaks, network tweaks, tweaks from Windows services and visual tweaks. In total, these are a few dozen changes to the Windows Registry and settings that each save a little bit of time.

Before you apply the tweaks, you can easily make a backup of the Windows registry - something that the creator strongly recommends, so that you can always return if something should go wrong unexpectedly. You can then scroll through the four tabs with tweaks to see if you want to tick extra tweaks or uncheck others, or whether you simply apply the selection of tweaks from the maker (it is useful that additional explanations are provided alongside each tweak if you click on the question mark clicks). After this, click on Apply Tweaks in the lower right corner, after which the changes will be implemented and your computer will be restarted.

The Simple System Tweaker interface is a bit messy, but the program is effective and on older PCs it is certainly capable of gaining speed.

Warning: Always make a backup and restore point before tweaking! 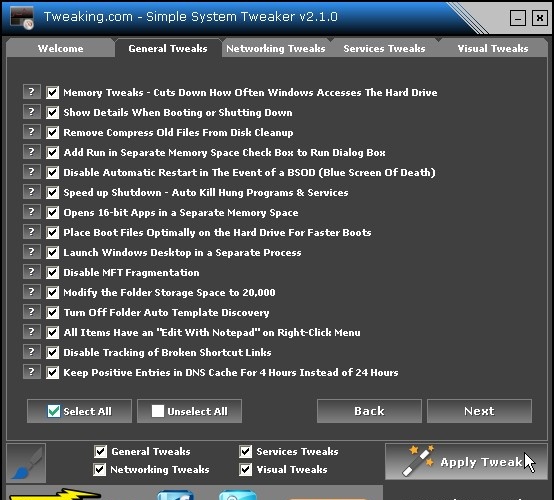 You can free download Tweaking.com Simple System Tweaker and safe install the latest trial or new full version for Windows 10 (x32, 64 bit, 86) from the official site.