If you are a Fan of strategic Board games, you will of Domination, of an electronic implementation of the Board game classic "risk", have a lot of fun. The rules of the game are geared 1:1 to the original.

After your armies have been placed, it is going on. Depending on the selected game type "missions", "Liberate the capital" or "ridding the world", it is your task, by skillful Attack and move troops to the aim of the game by "Dice" to get closer to. It should either be the whole Map controls, or a pre-defined objective to be met. In addition to the original board and various other maps you can use Domination on a Plan of the London underground, a America, Europe or Germany map, play. Either compete against the Computer or against up to five opponents, either in Hotseat mode on a single computer or via a network are connected to each other. 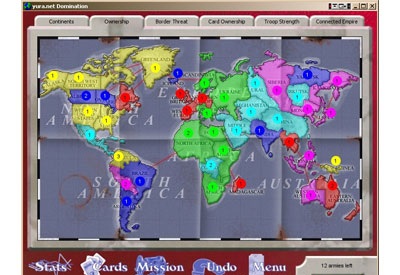 You can free download Domination and safe install the latest trial or new full version for Windows 10 (x32, 64 bit, 86) from the official site.