You want movies over the internet look but do you not first need to wait until an entire movie is downloaded? A streaming video service like Netflix offers a solution. Here you can see all available videos in categories view, a short summary reading and immediately start playback. Netflix costs around 10 euros per month, but now there is also a free alternative that is very much like it. On this page you will find more information about Popcorn Time.

UPDATE: In October 2015, a number of developers stopped with this project for fear of the legal consequences. Below, were among the people that the domain name is PopcornTime.io possessed. This was the most popular version of Popcorn Time. The website has since been off the air, and the makers advise to switch to Butter. With this program, users can only legally download content.

Popcorn Time is an open source and Dutch Netflix variant. It provides a very nice user interface for the streaming for torrent files. So, you can real-time download movies, and play simultaneously. And in contrast to, for example, Netflix is Popcorn Time absolutely free.

In many countries, is the streaming of copyright-protected content is prohibited. Therefore, the official site of the creators ended. However, the software is still available from several other sources. Since the program makes use of torrent files, it's still working after it has been installed. Torrents work via a network of users without the intervention of a central server.

After you select the appropriate software version (Windows, Mac or Linux) has been downloaded, unpack the ZIP file in the folder that you select. Then the program directly without installation startup. The first time get you will get a warning to see the movies on your hard drive are stored and from there are uploaded during the stream. Users are informed that this, in some countries, it is punishable. In contrast to many other peer-to-peer programs, it is not possible to automatically upload movies to turn off. When you agree to the terms of use, you are in the overview with images of the most popular films. On the left side of the screen, select a category, for example, if you only comedies or romantic movies want to see. Each film contains an image of the movie poster, with a short description.

After the click it starts the movie in theory, almost instant playback. In practice it can take a few minutes before Popcorn Time, sufficient buffer has to be downloaded for the playback to run smoothly. During the storage of this buffer, you will so a bit of patience.

The user interface of Popcorn Time is in the Dutch language. Both the descriptions of the categories as that of the films in your own language as well. Each film is shown, or there are also English subtitles are available by means of a small flag. During the playback of a video on the tekstballonetje the bottom right of the screen, you can choose the language in which you wish to display subtitles or the subtitles completely off.

Popcorn Time works, the short wait for the play, so smoothly and is so nicely designed that it's hard to believe is that it is open source software. Real movie buffs will not know what they experience. We warn you that the sharing of copyrighted material is forbidden in the Netherlands.

The software is available for all popular operating systems on laptop and desktop computers. The tool runs on Linux, Mac and Windows systems.

The service Popcorn Time is since may 2014 also suitable for smartphones and tablets that run on the Android operating system. The layout and the operation of these mobile apps is the same as that of the desktop programs. It does seem that the service is a bit slower to work. The Popcorn Time app is not downloadable in the official Android app store Google Play. Pretty soon after the app available in the store, was this by Google removed. So it is only possible to install the app through the APK file directly from the developer's site to download.

Popcorn Time has the following characteristics: 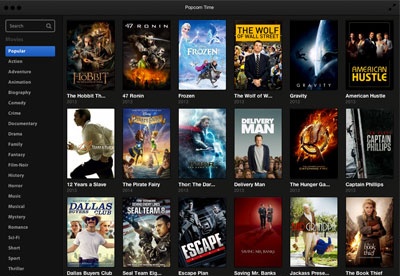 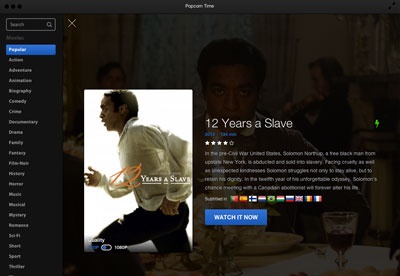 You can free download Popcorn Time and safe install the latest trial or new full version for Windows 10 (x32, 64 bit, 86) from the official site.