A thorough protection of your computer consists of a virus scanner and a firewall. The first protects your computer against malicious files that secretly be installed on your computer. A firewall protects the PC against attacks from the outside, such as, for example, by hackers.

ZoneAlarm Free Antivirus + Firewall provides, as the name says a free combination of these two functions.

UPDATE: Only the single firewall, ZoneAlarm is offered for free. The complete package with a firewall and virus scanner is only a month free to test then or should be paid for. Free alternatives you can find in the list of free security software.

ZoneAlarm Free Antivirus Firewall is a free security suite for Windows pcs. ZoneAlarm was always known for its free firewall software, but has in 2012 also a free software package released, in which an anti-virus feature function is integrated.

The free version is limited compared to the paid packages of ZoneAlarm: Internet Security Suite , and Extreme Security. This offer in contrast to the free version, namely technical support, parental control and optimization of the operating system. In addition, the free program only once in 24 hours updated instead of every hour.

During the installation of the software will, by default, a browsertoolbar first installed, this can be avoided by a custom install and check the box at the toolbar off. 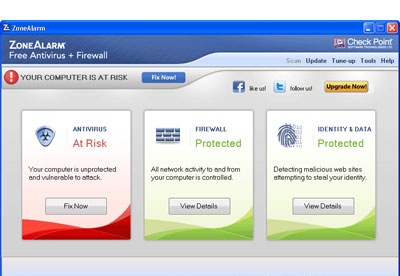 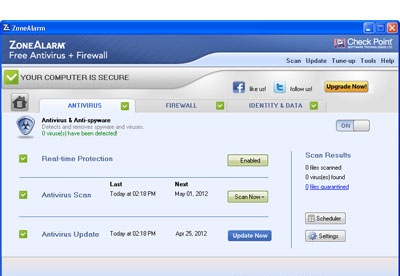 You can free download ZoneAlarm Free Antivirus + Firewall and safe install the latest trial or new full version for Windows 10 (x32, 64 bit, 86) from the official site.