Muslims by the mosque five times a day called for prayer. This is a fixed text pronounced. This gebedsoproep is athan called.

On this page you will find a free program that allows the gebedsoproepen are played on your computer.

Athan is a free Windows program that allows muslims automatically at the correct times to be called upon for the prayer. Five times a day is the traditional singing of the prayer to announce to your playing. The program is also translated into Dutch.

The software contains more than 6 million cities and towns for which the exact time is calculated for the prayer. After installation, you must be in this list first your select location. Then shows Athan the following six times for prayer. Taken into consideration is the distance to Mecca and the position of the sun. The program supports the standard and Hanafi method.

In addition to the free version, there is also paid Pro version. In this program, you can also set reminders a few minutes before and/or after the prayers. This happens with a recitation from the Qur'an. Also different prayers played at different times, and images of different Word mosques shown.

IslamicFinder, the provider of this program, also has an app for Android and iOS developed under the same name. This mobile app is also available for free download.

Athan has the following characteristics: 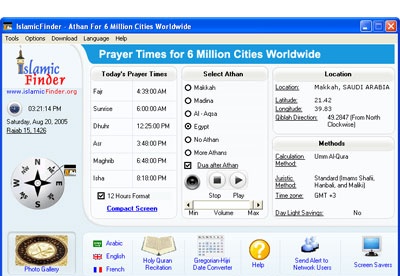 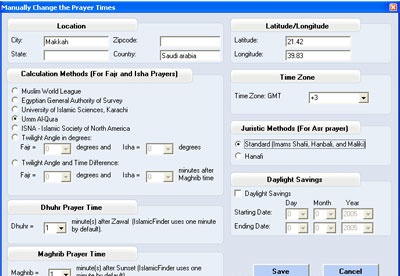 You can free download Athan and safe install the latest trial or new full version for Windows 10 (x32, 64 bit, 86) from the official site.