Edward Snowden is the most famous whistleblower in the world, the secret espionage activities of the Us secret service NSA made public. The former employee of the CIA and system administrator at the NSA had to take his land away from them and he lives in exile in the Russian capital, Moscow. From there, he remains concerned with privacy and online safety. Now Snowden Port released, an app that your personal environment monitors. So the app is able to real burglars to recognize by means of various sensors. The app ensures that your smartphone stops responding to movement, noise, vibration and light.

Port is free to use and only available for Android.

Snowden has developed the app with the Freedom of the Press Foundation and the Guardian Project. With Port should be your environment which is more secure and the app monitors physical locations. The app makes use of the camera, microphone and motion sensors of your Android device and will, after installation all by yourself configure. Certain things, such as the sensiviteit of the sensors, is manually change.

When a unknown person, for example a burglar in your home, office or other space, will Port directly respond to and photos and an audio recording. Your phone thus becomes a sort of security camera. The app will provide all the photos and images directly to a linked other phone and you will get immediately an encrypted message Signal, the messenger to be encrypted to communicate with. At the same time, the app will connect with a secure Tor network and when you click that web service log in to get all the recorded camera images.

Port is not hard to use. After the app is installed you still need a phone number where you want the message to be received, usually your regular phone.

Port is very suitable for older Android devices, so for example your old device used for this purpose and your current phone used for the notifications. Then you must open the app to access the photos on your device and gives you permission to take photos and record. You put your phone down somewhere, perhaps when you go to sleep or when you are in a hotel room unattended, and activate the app by pressing the 'Start Now' button. When the app then detects movement is the process of creating photos and videos in motion. You get a notification via the given phone number.

Your privacy is important to Port, and that's why the app is not connected with ordinary cloud services or other security services. Because the app uses the Tor network , you are not tracking, and you are the only one that the images can view. The app is fully open source and so to one's own needs and if you are not comfortable then you immediately get or Port is indeed as safe as Snowden claimed.

Port has the following characteristics: 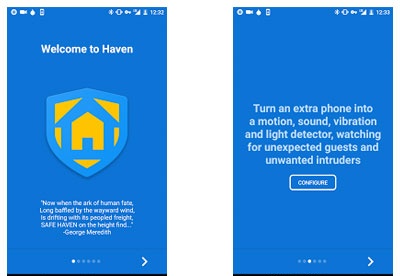 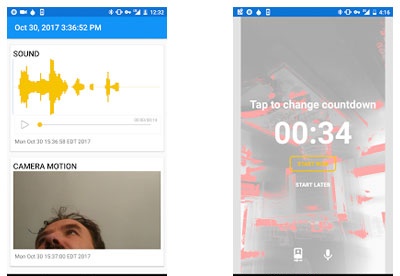 You can free download Haven and safe install the latest trial or new full version for Windows 10 (x32, 64 bit, 86) from the official site.