With Skype you can make free calls over the internet with anyone who also have Skype installed on the PC. Furthermore, you can at a very low price calls to regular (foreign) telephone numbers. Skype is the most well-known and popular example of free VoIP software, VoIP stands for "Voice over Internet Protocol".

UPDATE: In april 2013, it was announced that Microsoft is working on the development of an online version of Skype. This would need to be integrated in the webmaildienst of Outlook.com. There are already a number of users who have a trial version. When this feature available to everyone is not yet known.

Skype is a freeware program that you can download for free. The software is suitable for Mac, Windows and all major mobile platforms: iPhone, iPad, Android and Windows Phone.

Skype is ever started by the creators of Kazaa. In 2005, Skype was acquired by eBay and later resold to an investment company. In may 2011, Skype acquired by Microsoft for about 8.5 billion U.s. dollars. That Microsoft is the new owner ensures that from 2012 users with instant messaging, messages can be sent to Outlook accounts.

With Skype you can make free calls to other Skype users. So, if you are a family member or friend abroad, you can use Skype to make free and unlimited talking with each other.

If you have someone to call that does not have Skype installed, you can for a small fee also make calls to normal phone numbers at home and abroad. Calling abroad is generally very cheap with Skype. Since 2013 it is possible to from the program eGifts to send to your contacts. This is a credit that can be used for calls to landlines or mobile numbers in the netherlands and abroad.

Skype makes use of so-called VoIP (Voice over IP) technology that allows, via an internet connection to make phone calls. You have in addition to a computer and the Skype software, a microphone is required to talk. To be able to make video calls you will need a webcam. In many modern laptops have a microphone and webcam already built in and you can immediately after installation, launch Skype with free calls.

Skype also makes it possible to share the screen with someone else. You can use the menu to select your interlocutor, your computer screen can see. This is useful when, for example remote assistance is needed with computer problems.

In addition to the regular software you can also a taskbar installing Microsoft Outlook or Microsoft Office. Allows you directly from your inbox or a document be in contact via Skype.

Since February 2013, it is possible for video messages to leave for other Skype users that are currently offline. This videovoicemail function is available within the mobile applications of Skype. Only the first 20 video messages can be sent free of charge. Then, users need a subscription to Skype Premium.

You want your Skype calls? This function does not (yet) a standard part of this service, but you can add it by the Callnote app to install from the integrated app store.

In 2014 is partly due to the NSA scandal became known that Microsoft, with Skype also has worked to listen to its users by the American security service. If you are looking for a more secure alternative, we recommend the open source program Tox to install.

Skype has the following features: 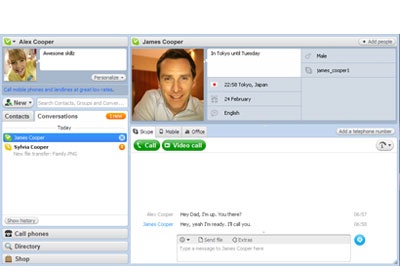 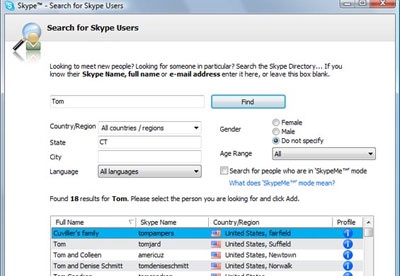 You can free download Skype and safe install the latest trial or new full version for Windows 10 (x32, 64 bit, 86) from the official site.