Pokémon Go was a huge success and now there is the new Pokémon game Pokémon Quest. That is a very fun RPG action game, a so-called role playing game. Pokémon Quest takes place on the island ‘Tumblecube Island’, where everything is square and in the form of a cube, and live there the Pokémon, who all by yourself stroll around, and you are going to fight against this monsters and on the other hand, you must again friends and Pokémon to add to your team. You go in search of food, prices, and other useful things and further you go the camps build.

Pokémon Quest is free to play and available for iOS and Android. Further, it is the game to download to Nintendo Switch.

Pokémon Quest is a pretty unique RPG game, where you sometimes have less influence than you might from other role-playing games are used to. It is an adventurous game to call. First, choose your language, where Dutch is unfortunately not available. Furthermore, Pokémon Quest in-app purchases, so that you should be aware of.

Every time when your finger touch the screen, go to the next step. You will be brought to the island, where even limited traces of a civilization. You have the island to explore and as much as possible loot. You tap then on a Pokémon where you have friends want to join and go play. Your Pokémon move by, tap the screen and further, you give your Pokémon orders on an instruction to click. So you fight against other Pokémon, where the fight is also happening on your screen taps, and defeats it, which one easier to beat than the other. If you doesn't do anything to move Pokémon itself on the island.

When a battle is over you will collect different objects that you find along the way. This strengthens your team and your base camp, that you at the beginning of the game itself is going to set up.

To new Pokémon to draw, and to your team to add you must be collecting food and good food preparation. If you have multiple Pokémon possess, you determine what you stronger. Every Pokémon has different properties, so it is useful there as well to think about. You fight, eventually with three Pokémon in different areas all over the island.

Every creature is to adapt the so-called Power Stones, making them more powerful and faster, and every Pokémon will see you with useful statistics, that you have a good understanding about their activities. You have your Pokémon really need to move on with your expeditions and for the other Pokémon to defeat. It is always possible to rest in your base camp, you use it as a base.

Pokémon Quest has the following features: 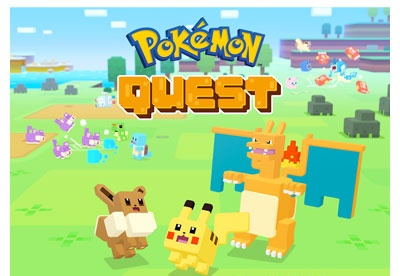 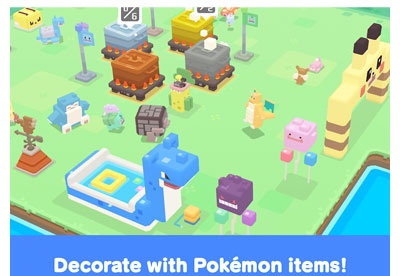 You can free download Pokémon Quest and safe install the latest trial or new full version for Windows 10 (x32, 64 bit, 86) from the official site.