Retro games are in. Super Mario Run Nintendo is currently the best example of this. But with Teeworlds will you also go back in time. Teeworlds is a retro multiplayer shooter, that is a bit of a game like Worms. With this game you fight with other players, where you with different weapons in the around can shoot. Within the game you can to up to 15 other players and yourself included, are allowed up to 16 players participate. A very fun shooting game, with different game modes, including Team Deathmatch and Capture The Flag.

Teeworlds is a free game, available for Windows, Mac OS X and Linux.

Teeworlds promises you a number of fun hours. The game looks old-fashioned, with an arcade feel, but plays very nice and especially very smooth. When you install the program, you can choose from a number of languages, including Dutch.

If you Teeworlds for the first time, you must choose a nickname for your Tee, a small round ball, or doll, that you are going to play the game. Then the program will connect to the private server, which may take some time. Here are the settings in advance to suit your where you server can change, for example. You can see immediately if a server is full, so you to another. It just click again on connect. You can see how many players there are in a room, where they came from and other useful information. Furthermore, the controls quickly customize the skin of your Tee and you control your Tee with your mouse and keyboard.

Your Tee is zwaarbewapend, where you have multiple weapons you can choose, such as cannons, a wooden hammer, a gun, or a special hook, which is on the ceiling back and forth can move and other players are grabbing it. You play in the room or server against the other players. You play one of the two variants, where you choose from team Deathmatch and Capture The Flag. In the first option you must make all your opponents shooting, what you are doing with your guns to shoot, and the player wins which at the end is still alive. In the second mode, you need the flag of another team to tackle. You are playing against unknowns, or challenges your friends.

As you play, there is the choice of a number of folders, but Teeworld has as option the possibility to create your own folders to design and make. You makes use of the built-in editor.

Furthermore, Teeworld chat, so that other players can chat, because, behind this game there is a large and involved community.

Teeworlds has the following characteristics: 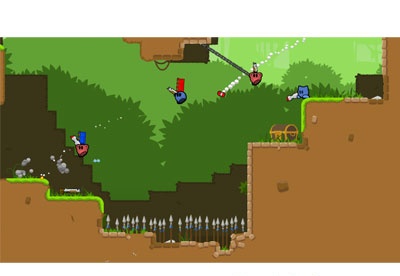 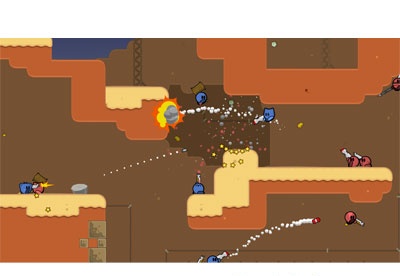 You can free download Teeworlds and safe install the latest trial or new full version for Windows 10 (x32, 64 bit, 86) from the official site.